Chris Amodeo’s recent burst into music has been mythic. As a Rolfer® and Shaman he already lives an unusual life committed to transformation. A few years ago he bought a guitar at a fundraiser, started playing for fun and things got really wild in the creativity department.

His simultaneous emersion into  Shamanism further expedited the process and has now launched him into an entirely new destiny.

Music hidden inside exploded in a big and unforeseen way. He, along with his band The Modern Minds, have released Amodeo’s first album of 14 original songs, Homo Luminous, meaning, “man of light”. Music reminiscent of classic folk-based 70’s rock merges with lyrics that are soulful and smart.

The Modern Minds are led by veteran drummer/producer Ray Weston and  rounded out by members who’ve worked with Pink Floyd, The Rolling Stones and The Motels.

Two shows at The Coach House last October and November followed by a show at LA’s legendary Whisky A Go Go on Jan 2nd  and a spectacular performance at the 2011 Sunset Sessions featuring legendary artists K.D. Lang, Daniel Lanois, and Stevie Nicks have launched Amodeo out into the world. Amodeo along with the Minds just played Worldfest 2011 and were invited back to play the first ever Sunset Sessions Rock. They killed it, along with phenomenal new bands like Kopek, Givers and Dead Sara as well as good friends Larisa Stow and Shakti Tribe. Next, Chris Amodeo and The Modern Minds play one of the coolest venues anywhere, the Hotel Cafe on July 28th. They’re also slated to play the Malibu Music Awards in September.

“My learning curve has been fast and fun. If anyone had told me a few years ago that I’d be writing songs and recording an album and then playing in these incredible venues right off the bat, I’d have accused them of being absolutely bonkers.  I think people are hungry for what’s real, soulful and transparent now more than ever, in this jaded, post-meltdown world. Music always has room to offer more .”

Thanks to Mike Troolines for putting the new video for “Foolish Notions” up on the site  video . My good friend and creative genius Jason Sikes, who brilliantly designed the Homo Luminous website and album is recovering from a traumatic fall. I continue to hold him in my heart with love and all hope of recovery.

Hi everyone. If you like the music that you hear, freely streamed in its entirety on the Homo Luminous website, please check out my new Reverbnation page and “become a fan”. Just click on my name below.

This will help you stay connected and in the loop vis a vis shows, videos, new releases, etc. I welcome your feedback, too!

Almost forgot to include this in the blog…hope you like the new video for “Foolish Notions”. This is my litttle girl’s fave.\”Foolish Notions\”

We had a blast playing Michelle Clark’s Sunset Sessions. K.D. Lang was masterful, I also thought Francis Dunnery was phenomenal as well. This guy is an amazing singer/songwriter whom I’d never heard of until Sunset, although he’s been around forever. His song “Wounding and Healing”(:21)  Francis Dunnery Live In Birmingham 4 had me quite choked up, seriously. Daniel Lanois’ Black Dub killed it and quite frankly, EVERYONE was blown away..music supervisors, program directors and label people were all texting like fiends while they played..it was one of the best sets of music I’ve ever seen.Daniel Lanois\’ Black Dub Check out “Ring the Alarm” on Youtube…I wouldn’t post because I couldn’t bear to include the ad that came before the video lol…one of the best sets!  I’m incredibly grateful to be included among such richly talented people!.. Stevie Nicks was delightful to hear and to meet… and her new record sounds great!

It has been too long since I’ve blogged…it’s been an incredible 7 months since Homo Luminous came out. Most of the planet hasn’t heard it, but I’m working on it.

Thanks for spreading the word.

…at The Coachhouse in San Juan Capistrano next Wednesday Oct. 13th! Getting tickets is easy…just click on “shows” right on this website and you’re on your way. The radiant and talented Larisa Stow and Shakti Tribe will bring their magic to open the evening. I look forward to seeing you there! 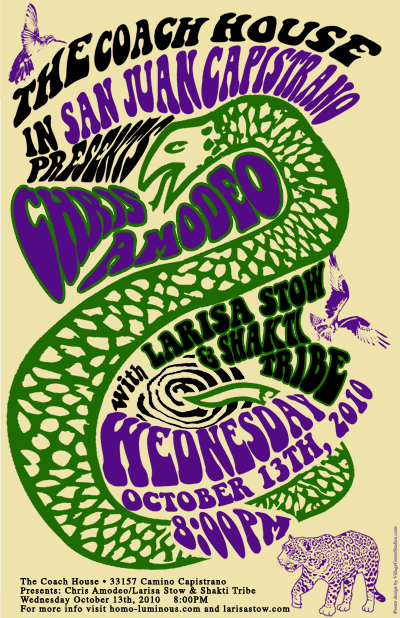